Paul Davis loves his Qwest, right down to the ladder 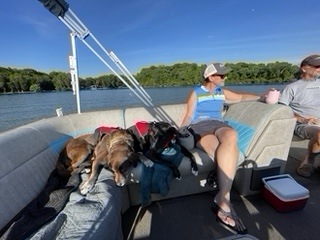 Paul Davis is a Water Resources Consultant from Mount Juliet, Tennessee, but when he’s not testing water, he’s cruising on it, in his Qwest 818 Lanai LS.

Despite the boat being rather large, he said it’s extremely easy to operate and handle.

“Sure, it is easy enough to drive,” he said.  “But also, to get people on and off, get swimmers in and out of the water, to get the Bimini up and down. In addition, I have a dock and lift so I bring non-ethanol fuel in five-gallon containers. I can place those beside the fuel tank and transfer with a simple safety siphon.”

While Davis has had other boats, his Qwest has topped them all.

“I owned a jet boat before I bought my Qwest,” he said.  “No comparison in how easy it is to drive or maneuver at the dock. The seating is more comfortable and it’s quieter. The biggest difference is reliability. In some shallow areas of my lake, we have aquatic weeds that would bring the jet boat to a stop. That required the operator to do a tedious clean-out. Some obstructions could simply not be removed by hand. I see other jet owners’ posts of similar problems online.”

Sometimes the little things really count, and Davis said that the ladder on the boat is one of the more clever features. “This ladder is curved so the lowest step is aft of the transom,” he said. “Not a true vertical so it’s easier to climb.”

Davis said the 818 was the perfect size for him and he had confidence in the dealer.  Everything was just right for him to fulfill his next Qwest moment. “Give me a nice day with out-of-town relatives cruising the lake to an on-the-water restaurant…..and that’s about perfect.” 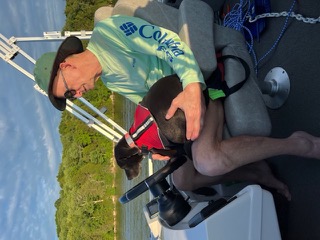 It?s all about having fun!